There hasn't been much posting on here of late because well, there hasn't been much to post.
Except for now.   FINAL-FUCKING-LEE!!!   We're making it over to fucking Europe for Denmark's 5th and final KILL-TOWN DEATHFEST.  Pretty much been a dream of ours to travel 'across the pond' as a full fledged band.  Check yet another box off our collective bucket lists.
Not to worry, this isn't gonna be another stupid, sellout,  returncoat reunion gig.
We never went anywhere - in more ways than one!
So to all you overseas DEATH METAL MANIACS, this is your best chance to catch us, not rotting but live and alive.
We're probably not gonna make it over there again. We ain't getting any younger or well mannered.
Just better...

Well, it's been quite the hellish year so far, nothing to do with CIANIDE for a change.  Not directly anyways.  Due to a LOT of personal shit that went down with us, we had to put a LOT of band time on hold.  More so than our usual...

Which is why we buckled down and practiced our asses off  this past month to play our only show this year!  We are driving down to Indy! 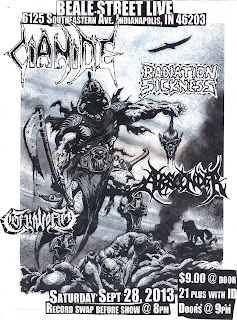 Special thanks to Doug and the mighty RADIATION SICKNESS for putting this IMMENSE line-up together.  With our pals in ABSCONDER and COFFINWORM, we're really looking forward to tearing it up and purging our darkened souls.
The Children of Hell never rest...

Time for our usual "Not much going on" post, which I wish wasn't true as we each do battle with the flu and Winter/New Year's dooldrums.  We haven't even looked at our gear since our GIVE THANKS TO THE METAL GODS show this past Thankgiving except to throw it in the dungeon like a petty theif left to be forgotten about and die - slowly.

Never fear though as the fire still burns.  We have 2 songs already written (well almost) and need 1-2 more for our next record which will be an EP.  Probably throw a cover song in there too.  Depends.  Realistically we're looking at mid-late summer to start recording.  Ah fuck it.  Summer is too hot and Fall is THE BEST season anyway.  We'll shoot for that.  Prepare to be PULVERIZED!!!

Lot of show offers of late.  With the above schedule we're gonna have to icksnay if not but all of them.  Unless something "too good to be true" comes our way, staying put right here in Chicago for CIANIDE live shows sounds waaaaayyy more appealing the more older and crabby we get.  We got a good thing going at The Empty Bottle for every Thanksgiving weekend, so might as well roll with that.   With age comes wisdom, and at least we're getting more handsome...

Here a few live clips from our last gig.   Show the world what they're missing:


A nice review of the show:

Well, summer is about gone and we've took some time off to re-group and bbq/drink. We're back at it now and hard at work on writing new material for an up-coming 4 or 5 song 12" ep to hopefully come out early 2013. The new shit were writing is heavy as all hell and coming along quite nicely for a change! Seems there is some life in these old Iron Dogs after all.

Also...we had no plans to a do show for the rest of the year but, here we are with one last Heavy Metal show that should not be missed. We've assembled a sorta dream line-up (bands we've wanted to play with for years) and are proud as hell to bring this to all our metal brothers and sisters here in bloodshed city....Chicago!! Show is at Empty Bottle, Saturday Novemember 24th (1035 N Western Ave). We'll have more news as it happens....Cheers. 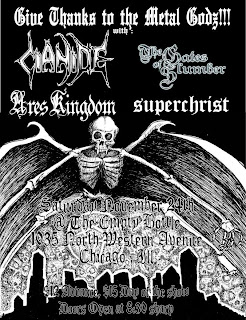 ps....quick thanks to Rob Campos for the killer flier, you rule man!
Posted by Cianide at 8:53 PM

Well, well, well....here we are almost at the end of Cianide's fiscal year. Fuck me, what a year it's been too. Probably the most 'productive' we've been in this 20yrs(+) ride. Not bad for some aging fuckers, eh? Have to say that the last gig a couple weeks back with Autopsy, Cardiac Arrest and Bones was nothing short of fucking stellar. A better night could not have been had...place was sold out and filled with excitement the whole time, and all us local boys gave it our all to a very much appreciative crowd!! Gotta say Chicago made us proud that night and Autopsy was floored by the reaction of the show. Was so great to have beers and catch up on old times with the mighty Autopsy... a greater bunch of metal sicko's cannot be found anywhere, and fuck did they SLAY!

So, what else...ah yes, the NYDM Spring Bash III up in Wisconsin was a blast last month too. Again, we were treated well and our brothers in Cardiac Arrest and Absconder raged the stage with us that night. Great time and one for the memory books...cheers to all you Milwaukee men and women, you know who you are!!

Up next is Portland's Goregon fest....I think?? We've still not received our flight tickets but, promises have been made so we just gotta see what happens. I'm sure all will be well and can't wait to slay the west coast for the first time in our lives! Gonna fucking rule. Get ready you crusty fuckers...there's a fucking storm fighting it's way from the Midwest back to the West! Lets Go!

Also....in case anyone don't know. Deathgasm Records have re-issued our debut on cd. This has been long overdue and Evan has done a fantastic job with this. Go buy it and pick up a shirt too...GO HERE.

Ok, that's about it for now...here's a vid and pic from the Autopsy show for all you Death Metal Maniacs!!! 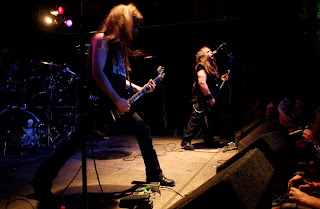 ps....here's an interview I did with Autopsy's Chris Reifhert for the Chicago Reader. Get a drink and enjoy.
Go HERE. A Descent Into Hell CD reissue

Take A DARK DESCENT INTO HELL over to Dark Descent Records and get your CD copy of our long out of print second album.
Pick up the T-SHIRT while you're at it.  They look all kinds of cool. 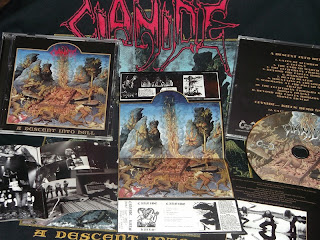 A Descent Into Hell + demos Triple LP from The Crypt.

The Crypt is proud to announce the second album from Chicago Death Metal kings CIANIDE! For the first time ever on vinyl we present the band's sophomore masterpiece "A Descent into Hell" coupled with their "CIANIDE... KILLS" demo and “Scourging At the Pillar” unreleased track..


Formed in 1988, CIANIDE's vision was to create the heaviest Death Metal in existence... and they DID! Truly CRUSHING and DEATH HEAVY, the way it was meant to be, finally seeing the light of day once again, on glorious vinyl format!!!

Strictly limited to a one-time only pressing of 666 hand-numbered copies, 222 sets will be on 180 gram classic black vinyl.

Clocking in at almost 80 minutes, the length per LP side ended up being way too long to fit a standard double LP set. For optimal sound quality, this massive Death Metal Beast is mastered at 45 RPM across 3 slabs of wax. They come housed in a 350 gram, reverse-board printed, triple gatefold jacket featuring the original CD cover art, "Hell" by The Limbourg Brothers, lyrics, unpublished band photos and new extensive liner notes by all 3 original members.


I can already feel the ground starting to shake...
Posted by Cianide at 3:04 PM

We used to call them tapestries...

Scott's been hitting the weights... 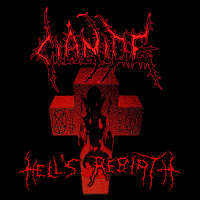 One way ticket to heck...